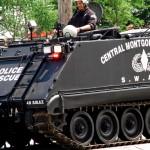 According to a running series from Radley Balko at the Huffington Post, this is only one of countless raids-gone-wrong over the past few decades—raids that demonstrate the growing militaristic police force and the dangers we all face when confronted by them. END_OF_DOCUMENT_TOKEN_TO_BE_REPLACED

District Attorney Seth Williams has dropped at least 11 drug cases in recent weeks. The reason? He says that six narcotics officers that worked to build these cases have lost credibility and would not be called as witnesses, making the cases against the defendants too weak to try. But what the officers did to lose this credibility is still in question. END_OF_DOCUMENT_TOKEN_TO_BE_REPLACED