An estimated 850 police departments in the United States mandate video recordings of interrogations. They do this for a variety of reasons, but mainly to ensure accountability on both sides of the questioning table. Still, the Philadelphia Police Department doesn’t. They maintain they simply don’t have the money for it, ignoring the possibility that such documentation could actually save costs in the long run.

Twenty-year old Shaquille Rainey was questioned for 20 hours by Philadelphia police whom he said shoved him, threatened him, and blew cigarette smoke in his face. They did this four years ago, when he was a 16-year old child. They were questioning him about his cousin, who they insisted killed a man, and believed Rainey could provide the information needed to convict. He signed a statement implicating his cousin without reading it. It wasn’t until several years later that his cousin was acquitted, not because of the questionable tactics in Rainey’s interrogation (remember: it wasn’t recorded), but because of surveillance footage showing both men were nowhere near the scene of the crime. 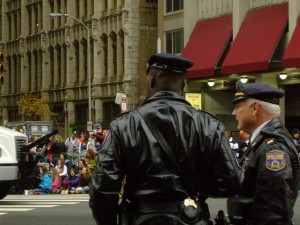 In this story, a recorded interrogation would have revealed unethical practices by the police, if the presence of a camera didn’t stop their questionable questioning before it happened.

In other cases, recorded interrogations could absolve the police of unfounded accusations.

“We are constantly accusing them of engaging in some sort of impropriety, putting words in people’s mouths, not feeding them, not letting them talk to their families,” said city defense attorney Gary Server. “That could end if we saw what was going on.”

Cameras in interrogation rooms would truly be a win-win. But the city says they simply don’t have the money or the policies in place.

“It’s not as easy as throwing a camera in a room. There are a lot of logistics that have to be worked out,” said police lieutenant John Stanford. Stanford said that Commissioner Charles H. Ramsey supports recorded interrogations but that getting a program like that in place takes both time and money.

“Every major jurisdiction and most of the minor jurisdictions in Pennsylvania videotape now, and they [Philadelphia] don’t. So they’re just coming up with reasons to delay,” said Ronald Greenblatt, chairman of the Pennsylvania Association of Criminal Defense Lawyers. “The fact that they don’t is suspect, and what it does is take away from people’s trust in the system. Jurors are not stupid. They know how inexpensive videotape equipment is.”

Greenblatt and other call the city’s justifications for no recording equipment “excuses” and rightfully so. With the lawsuits and allegations that can arise without recorded interrogations, it seems the city is simply dragging their feet.

If you are accused of a crime and interrogated by the police, you have the right to request the presence of your attorney.